What Are The Signs Of A Real Christian Conversion

To answer the question as to what are the signs  of a real Christian conversion,  let’s look together at a man who was probably the FIRST Christian convert.   This was a  sinful man who near death looked to Jesus and received a revelation from God.  We see in his conversion signs of the changes that we expect to see in a TRULY SAVED person. 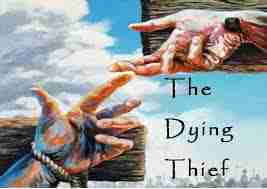 As our Lord Jesus hung upon the cross, two criminals were executed, one on either side of Him.  One of them ‘railed’ against him – the other one had an amazing salvation experience. This was probably the FIRST conversion since the ‘cross’. The Lord is very merciful. He reaches out and calls men to come to Jesus to the last hour! GOD IS LOVE.

Luke 23: 33 – 43, Matthew 27: 38 and Mark 15:27 describe this event. The account as recorded in Mark 15 28 differs in that it says that BOTH criminals raged against him. If this is the case then one had a radical change of heart. (However, serious bible students will find that this verse is omitted from the most reliable source manuscripts).

Both criminals perhaps had heard of Jesus; they might have seen him and listened to his teachings. We do not know.   However we do know that at this hour in history, one of them had a wonderful and amazing revelation from God that changed his eternal destiny.  One saw (at the very least) that Jesus was a righteous King in the kingdom of God. Jesus was the King – coming into his deserved magnificent kingdom.

Jesus divides men into two camps; those that love and accept Him and those that reject and hate him. Jesus himself said ……

All humanity eventually falls within one of these two camps.

THE VISION OF JESUS

In answer to the question as to what are the signs of a real Christian conversion, one important sign is some “vision”, some appreciation of Jesus loveliness, no matter how veiled that vision may be.  I believe that before anyone comes to Jesus, God reveals something (no matter how dimly at first) of the loveliness of Christ that touches and softens there hearts.   This tortured dying sinner saw by revelation, the majesty, love, nobility and glory of the Master; this presently, crucified tortured Christ. Perhaps he had been in awe and wonder as earlier, Jesus had prayed through his agony  – for his enemies “Father, forgive them – for they don’t know what they are doing!”  This ‘thief’ saw perhaps dimly – but he had such a revelation!

True Repentance Is Never Too Late

As this incident shows us, true repentance is never too late. God strives often with sinners in love to the very end.
However, this should not encouragement any to any to put off their repentance to their deathbed or to hope that then they shall find mercy and the opportunity  to repent after death.   We must also realize that although repentance is never too late, often the years leave the heart so hard from sinning that the sinner is unable to truly repent! None can be sure that they shall have time to repent at death.

EVIDENCES OF THE CALL OF GOD’S SPIRIT

It is important to understand that although God calls us to a place of decision regarding Jesus, that call is of God. Salvation is ALL of God. Yes, we respond – but it is God’s call. Millions of people are basing there salvation on one so called ‘sinners prayer’. Or, even putting up a hand at a meeting to decide for Christ. OK (just to reassure thse who have prayed such a prayer) – God may use these methods. However, as we look back we can see certain ingredients in our heart attitude that normally comes at the time of the conversion experience. These attitudes grow as we move deeper into Jesus love! Let’s look at some of them: – These attitudes were in the heart of the dying thief.

We Must Come Empty To Jesus Feet

Another of the signs of a real Christian conversion is coming to Christ EMPTY, offering no good works to help purchase God’s FREE gift of salvation.  He did not make promises – He came as an empty sinner. This guy just came ’empty’. He knew he had nothing to offer except his sinful self. WHEN WE COME TO JESUS WE HAVE NOTHING GOOD TO OFFER HIM. We trust His forgiveness, mercy and grace. The Holy Spirit ‘convicts’ us and shows us our need AND HOPELESSNESS.

He no doubt was a ‘hard – hearted ‘ man. But God gave him a heart that softened at the last. He was just ready to fall into the hands of Satan, was snatched as a brand out of the burning but here, Satan was left to roar as a lion disappointed of his prey. The softness in his heart is illustrated by his response to Jesus sufferings, “This man has done NOTHING wrong!)

In true conversion GOD softens our hearts. We may feel the very nearness and closeness of Jesus. There MAY be tears of sorrow for past sins.

Fear Of hell and Judgement Are Normally Present

Luke 23 :40 – But the other answering rebuked him, saying, Don’t you fear God, seeing thou art in the same condemnation?

When God calls Us We Realise We DESERVE God’s Judgement and Acknowledge The Justice Of God.

Luke 23:41 – And we indeed justly; for we receive the due reward of our deeds: but this man has done nothing wrong.

The dying thief admitted that he deserves what was done to him: “We indeed justly”, he said. They may have both suffered for one and the same crime, and therefore he spoke with even greater certainty.

He believes Christ to have suffered wrongfully. Jesus had already been condemned in two courts by a totally farcical and unjust system as being te worst kind of deceiver. This penitent thief is convinced, by his conduct in his sufferings, that he has done nothing wrong! We like him, will see Jesus as the SPOTLESS (sinless) sacrifice.
Whether he had before heard of Christ and of his wondrous works does not appear, but the Spirit of grace enlightened him with this knowledge, and enabled him to say, “This man has done nothing amiss”.

Salvation involves A ‘Calling’ On the Name of The Lord

He cried out from his heart! “Lord, remember me when thou come into you kingdom”, (v. 42). Perhaps he never prayed before, and yet now was heard, and saved at the last gasp. We are encouraged to ‘Call upon the Name of the Lord.

Conversion Involves Repentance towards God and Faith In the Lord Jesus

Observe his faith in this prayer. In his confession of sin (v. 41) he discovered repentance towards God. In this petition he discovered faith towards our Lord Jesus Christ. He owns him to be Lord, and to have a kingdom, and that he was going to that kingdom,

Salvation Causes Us To Confess Christ Before Men

Acts 20: 20, 21 – I kept back nothing that was profitable unto you, but have showed you, and have taught you publicly, and from house to house, testifying both to the Jews, and also to the Greeks, repentance toward God, and faith toward our Lord Jesus Christ.

My prayer is that this short study on What are The Signs  of A Real Christian Conversion has blessed you.  To contact me with prayer requests, comments or even criticisms go to – Contact Marcus at Bibletruthsrevealed