Who and What is God

This is a question asked by every child. That question is who and what is God?
Nobody can answer that question. What does the Bible tell us?  The answer according to the Bible is that nobody made God.

Sometimes the questions  that we ask make us just like little mosquitoes in the water looking up and trying to understand what a human being is!  God is so great and so far above our understanding but we can never fully comprehend the things concerning him.

Dr Haley in his famous  Haley’s Handbook To The Bible,  said,  “there are some things beyond us. We cannot conceive the 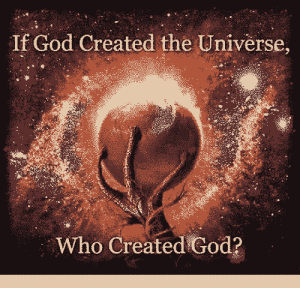 beginning of time nor the end of time, We cannot know the boundaries of space and there are so many things that we cannot understand.”
Questions like, ” has the world been in existence always?” Or, “was the world made out of nothing?”  One day we will know!

As we look into the word of God two things are very clear. God is self -existing. God is also eternal without beginning and without end.  All created things depend upon receiving life and existence from God and also have a beginning and an end.
It is clear from the scriptures that even the highest angels had beginning and received their life from the creator God.  Every human being on the planet, male or female had to receive life from a father and mother and had a beginning.  What the Bible teaches clearly concerning God however, is that God has never had a beginning. He also will never have an ending and he is self existent and dependent upon nothing and no-one!

Both the epistles of John and the Gospel of John tell us that God was there in and from the beginning. (John 1:1, 1 John 1:1).

Our mind boggles as we think and are trying to comprehend far back into the reaches of time and to a beginning.  And no matter how far we go back we can see the God never had beginning.

Not The The Mormon god

Consider the god of the Mormons. The Mormons consider themselves to be Christians but it may amaze you and surprise you that these people believe in a god who had a beginning.  Not only has the ” mormon god” a beginning but was also believed to have been brought forth by a previous god.  Such a god cannot be God because God has life in himself and never had a beginning.  The Mormons also have many strange teachings that are not found in the bible.

The Mormons do not teach this ( and other strange doctrines) openly to new converts but keep it secret.  Even many mormons who have been mormons for many decades do not even know that this is the official Mormon doctrine.  However, I have spoken to Mormon Missionaries and they assured me that this is what they do believe. But this “Mormon god” is not the God of the Bible. The God of the Bible, the God and Father of our lord and savior Jesus Christ has life in himself, gives breath and life to all things, is self existent and never had a beginning because our God is eternal.

The Son Also Has Life In Himself

The Gospel of John in the first chapter tells us that life has been streaming for it from him since the beginning.

John 1:4, 5 – In Him was life, and that life was the light of men. The Light shines in the darkness, and the darkness has not overcome it.

The book of colossians tells us that Christ Jesus is our very life, (Col 3:4).
The Lord Jesus described himself as the way the truth and the wife, (John 14:6).  Divine LIFE is continually streaming for the son of God!

The Son Eternal With The Father

The Son of God Jesus is also eternal with the father. Hundreds of years before his birth to Bethlehem it was prophesied concerning him that his “going forth” had been from ancient of days ( eternity).   The literal Hebrew language says – from the vanishing point:

Micah 5:2 – But you, Bethlehem Ephratah, though you be little among the thousands of Judah, yet out of you shall he come forth to me that is to be ruler in Israel; whose goings forth have been from of old, from everlasting.

Also, the prophet Isaiah, some 700 years before his coming also prophesied that he will be called the everlasting all the Eternal father!

Isaiah 9:6 – For to us a child is born,to us a son is given,and the government will be on his shoulders.And he will be called, Wonderful Counselor, Mighty God, Everlasting Father, Prince of Peace.

Our God is omnipotent. That means that he is almighty and there’s nothing beyond his capability and power to accomplish.

Now that our saviour Jesus has risen from the dead, he also has all power and authority of heaven and earth (Matt 28:19).

Besides being almighty, God is omnipresent. That means that he is everywhere at the same time. God’s presence fills the universe;  his presence fills all the universes and the heavens and the earth.  David asked the rhetorical question, “where can I flee from your presence?”

We must surely stand in awae as we consider the Wonderful thing our Lord Jesus Christ did when he stepped out of heaven to come to earth.  Jesus in coming to earth as a child laid aside both his omnipotence and his omnipresence.
When Our Lord came to earth he voluntarily laid aside his almighty power and humbled himself to be obedient to and totally dependent on the power of God the Father. He said these words:

John 5:19 – Then Jesus answered and said to them: “Truly, truly I say to you, the Son can do nothing from himself except what he sees The Father doing, for whatever that One does, these things the Son also does in like manner.

John 5:30 – I can do nothing from Myself; as I hear, I judge,  and My judgment is just, because I do not seek My own will, but the will of Him who sent Me.

Our Lord also has he ministered on this earth, travelled as he carried god the Fathers’s power and authority and ministered in the Father’s name.

God is not limited by lack of knowledge for he knows all things. The Lord Jesus told us that the father knows the buried number of hairs on
the head of every person, (Luke 12:7 ).  There is also not one single sparrow that falls to the ground without the father in heaven knowing, (Matt 10:29).

He knows what we are going to pray and he can answer our prayers before we pray it.

Let’s remember how wonderful Jesus was to be willing to be laid aside his omniscience.  When Our Lord came to Earth to take a true humanity he had to learn  as a child.  The bible tells us that Jesus increased in wisdom and stature and also in favour with God and with man. (Luke 2:52)

RETURN TO WHAT WE BELIEVE

RETURN TO (HOME) – JESUS CHRIST IS THE WAY, THE TRUTH AND THE LIFE