The Prayer of Jabez

In First Chronicles 4:9 we are introduced to ” The prayer of Jabez “.   Jabez was a man with a big disadvantage in his life.  He was born with a disadvantage  that gave him a stigma.   But Jabez became a great success story.  This inspiring sermon will show you how the God of Israel wants you to call unto him as jabez did to give you Mighty Blessings. 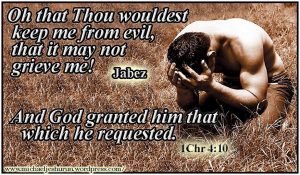 RETURN TO – Christian Audio Sermons (Menu)
OR
RETURN TO (HOME PAGE) – Jesus Christ is The Way, The Truth and The Life