Today we are going to look together at the meaning of the olive tree; the olive tree symbolism in the bible. The Lord Jesus Christ gave me this message. He took me in my mind and heart to meditate on the spiritual lessons that this tree – often mentioned in the bible teaches us. The Lord showed me many wonderful truths as I spent time listening to Him.  For Instance He has made the reality of heaven very real to me! 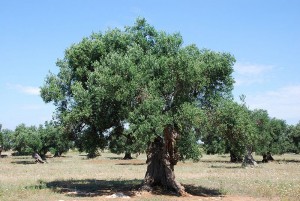 The olive tree is very prominent in Israel and in the writings of sacred scripture. When Israel conquered Canaan under the leading of Joshua, the olive tree was a prominent feature among the flora of the land. The land was describes as – a land of wheat and barley, of vines and fig trees and pomegranates, a land of olive oil and honey; (Deut 8:8).

On the outside, the olive tree may seem rather ordinary – like any other tree in its appearance and size. However the olive is remarkably strong and also remarkably resilient! It can also endure extremes of climate and drought; it can survive in arid conditions which would destroy many other trees! It is also extremely long-lived! There are trees in Israel estimated to be 1000 years old that are still producing fruit! In its old age the tree becomes hollow, but the trunk continues to grow thicker and thicker. At times its circumference can reach up to 20 feet. We will see that all these facts concerning the tree bring us messages from God.

There is an important principle in the study of sacred scripture. This principle has been mentioned by many good bible expositors. It is called ‘the principle of first reference’. What this means is that the first biblical reference to anything in the Word of God throws light upon its message, meaning, symbolism in the rest of scripture. 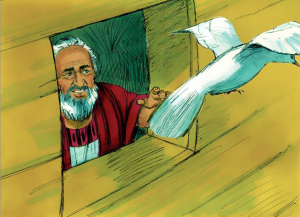 The first mention of the olive is found in the book of Genesis, chapter 8. It refers to Noah sending out a dove from the Ark, after the judgement by God on sinful humanity by the worldwide flood. The dove returned to Noah with a freshly plucked olive branch in its beak.

Gen 8:7 to 11 – Then he (Noah) sent out a raven, which kept going to and fro until the waters had dried up from the earth.  He also sent out from himself a dove, to see if the waters had receded from the face of the ground.  But the dove found no resting place for the sole of her foot, and she returned into the ark to him, for the waters were on the face of the whole earth. So he put out his hand and took her, and drew her into the ark to himself.  And he waited yet another seven days, and again he sent the dove out from the ark. Then the dove came to him in the evening, and behold, a freshly plucked olive leaf was in her mouth; and Noah knew that the waters had receded from the earth. So he waited yet another seven days and sent out the dove, which did not return again to him anymore.

Genesis 6 and 7 records the great flood; it tells how mankind has become so wicked, so depraved, that every single imagination of every man was only evil continuously. Mankind had totally corrupted his way upon the earth and God’s heart was broken! Mankind was irrecoverable and the Lord, greieved at heart decided to destroy mankind from then face of planet Earth by means of a great and a universal flood! This flood is recorded by many cultures and peoples.

We know that one man (Noah) found favor in the eyes of the Lord. God told him to build an ark into which his wife and three sons, together with their wives were to enter when the judgement waters of the flood were poured out! Noah was NOT A PROUD man.   Like all men who are humble he was a man of strong faith.   He believed God and started to build a great ship. Noah was a preacher of righteousness and he would have repeatedly warned the men of his generation that they needed to repent and that the flood waters were coming. They mocked him – as he continued in faith you build the ark.   Finally God called Noah and his family to enter the ark and the floods, drowning every living thing upon the face of the earth was poured out!

Noah and his family were safe, borne up by the flood waters – together with the animals that the Lord had instructed Noah to take in the ark with him. When the waters finally abated and the judgement of sinful mankind was complete the ark settled on the mountains of Ararat. The word Ararat denoted holiness.  God had translated Noah and the 7 members of his family from one sinful society – one sinful ‘kingdom’ into new land of deliverance and fresh hope. Into a kingdom of deliverance and righteousness,

The Olive Sprig and Dove

When the ark descended to mount Ararat, Noah wanted to know if the flood waters had abated from the earth.  To ascertain this he sent out birds.   First he sent out a raven and after that a dove,  The dove being a symbol of the Holy Spirit (Matt 17: ), returned to Noah.  The dove being a ‘pure’ bird still could not tolerate the muddy, messy land – so Noah knew that the waters had not yet receded from the earth.

After 7 days Noah sent out a second dove which returned to him with a freshly plucked olive leaf in its beak.  The symbolism of the olive tree is profound!  The olive was a symbol of the ” new life” that had began to reappear on the face of the earth after all the judgement and destruction.    So in this ” principle of first reference” we have a picture of new life ( the olive) brought by the Holy Spirit ( the dove) after God pours out his judgement on the earth.  Jesus will bring peace and new life in his Holy Spirit when he returns to earth after God pours out his judgement ( the waters) on a godless, sinful, Christ – rejecting world!

The scriptures also tell us that when Jesus returns to earth to set up his kingdom and bring new life and peace  his feet will stand upon (guess where?)      Yes !   The Mount of olives!

Zech 14: 3, 4 , Then the Lord will go forth And fight against those nations, As He fights in the day of battle.  And in that day His feet will stand on the Mount of Olives, Which faces Jerusalem on the east. And the Mount of Olives shall be split in two   ………………………..  .(v9), And the Lord shall be King over all the earth. In that day it shall be– “The Lord is one,” And His name one.

The scripture is so well integrated and tied together and every scripture passage, clarifies, enlarges on and ties in harmoniously with every other scripture!

Eternity Planted In The Heart of Man

it’d a profound fact with a deep significance that the United Nations Organization has also adopted the olive as the symbol of world peace.  The meaning and symbolism of the olive as the symbol of the new life of peace Christ will bring is implanted deep in men’s hearts!    The bible tells us that God has actually planted eternity deep in the heart of man (Ecc 3:11).  People know more of eternal things and eternal values tan they care to admit!    When unbelieving men and woman mock the wonderful gospel of Jesus Christ they are resisting the witness of God’s holy Spirit as well as truth that God has implanted deep in their hearts that they need God.  On December 7th 1946 the United Nation approved a map of the world surrounded by olive branches as the symbol of world peace.

And so, the Lord Jesus Christ, the Prince of Peace will return to this war-torn, disease – ridden, godless, sin-soaked rebellious earth His feet will stand victoriously on the mount of olives.  Our Lord will be King over all the earth.

Grafted Into The Cultivated Olive

Let’s turn to another New Testament passage of scripture which talks about God’s Olive Tree.  Let’s read together Romans 11:17-24.

if some of the branches were broken off, and you, being a wild olive tree, were grafted in among them, and with them became a partaker of the root and fatness of the olive tree, do not boast against the branches. But if you do boast, remember that you do not support the root, but the root supports you.   You will say then, “Branches were broken off that I might be grafted in.”   Well said. Because of unbelief they were broken off, and you stand by faith. Do not be haughty, but fear for if God did not spare the natural branches, He may not spare you either.  Therefore consider the goodness and severity of God: on those who fell, severity; but toward you, goodness, if you continue in His goodness. Otherwise you also will be cut off.  And they also  the Jews) , if they do not continue in unbelief, will be grafted in, for God is able to graft them in again.
For if you ( gentiles)  were cut out of the olive tree which is wild by nature, and were grafted contrary to nature into a cultivated olive tree, how much more will these, who are natural branches, be grafted into their own olive tree?
In this passage of scripture, the apostle Paul uses the image of the Olive Tree to speak of the people of God.  After Jesus resurrection, originally, all the apostles and prophets of the Lord Jesus were Jews.  Later (in Acts 10) God begins to call in the gentiles.  When God calls us who are gentiles and we come to faith in Christ, he grafts us the gentiles (v17) into the cultivated olive tree – who are the true people of God.
Before Jesus was born and walked this earth the special blessings of God were reserved for Israel.  The gentiles are portrayed in scripture as being without God or any hope in the world  (Eph 2:11, 12)
Eph 2:11, 12 –Remember that you, once Gentiles in the flesh–who are called Uncircumcision by what is called the Circumcision made in the flesh by hands- that at that time you were without Christ, being aliens from the commonwealth of Israel and strangers from the covenants of promise, having no hope and without God in the world.