The Book of Genesis

Who Wrote The Book of Genesis? 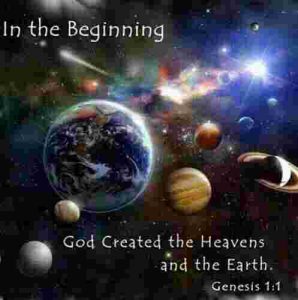 The age-old Hebrew and Christian tradition is that Moses guided by God was the person who wrote the book of Genesis.  He composed Genesis out of ancient documents extend in his day.  The book closes something like 300 years before Moses Moses could have gotten his information only by direct revelation from God or through such historical records has had been handed down from his forefathers.

Genesis Leads Us To Christ

Through a careful use of genealogies, Genesis traces a remarkable family line that begins with Adam and ends with the 12 sons of Jacob. While occasionally other siblings are introduced into the story, they are merely branches in the family tree. The main trunk is what matters, and it eventually leads us beyond Genesis to David and then to Jesus Christ because the Lord Jesus Christ is the bible’s glorious theme.

The Books In Genesis

Opening with the creation  hymn, the book of Genesis then  given 10 books of Generations which constitute the framework of the book.  It seems that these books of generations were Incorporated bodily by Moses with such additions and explanations as he may have been guided by God to make.

These eleven documents are as follows

These eleven documents originally family records of God’s chosen line and kindred families which composed the Book of Genesis cover the first two Thousand Years of men’s history from the creation of man to the settlement of God’s chosen people in Egypt.

Satan’s Fall – The Cause of The Darkness and Chaos

Genesis chapter one describes the chaos and darkness on the waters of the deep.   This was a catastrophic result of Satan’s fall!  According to the book of Job, when God originally create the earth it was NOT a waste void: God always creates beauty and form with light and joy!

Job 38:7 – who laid its (earth’s) cornerstone, 7 When the morning stars sang together And all the sons of God shouted for joy?

The Concordant Version of Genesis translates the opening verses of Genesis as follows:

Gen 1: 1, 2 – In the beginning God created the heavens and the earth,  yet the earth became a chaos and vacant.

The Concordant Version does not say “and”; it says “yet.”   In the beginning God created the heavens and the earth; the earth coming from the hand of God would have been beautiful and yet the earth became a chaotic, vacant messs.   What would have caused God’s beautiful earth to become a waste void?  It was the rebellion of Satan.

Ezekiel 28:15 says that Satan was “perfect in his ways from the day he was created” . Of course, God didn’t create an evil Satan. God created a good and perfect archangel. But at a certain time, this archangel, the anointed cherub, rebelled against God.   The results were catastrophic for all creation!

Satan rebelled against God because of pride in his heart. Ezekiel 28:17 says that his heart was lifted up because of his beauty, that he corrupted his wisdom by reason of his brightness. He was “full of wisdom and perfect in beauty”; he “sealed up the sum,” (Ezek. 28:12).  This means that he had the full measure of completeness and was short of nothing. But as he gazed on his beauty he became proud.  He looked at his brightness and became corrupted.

The proud Devil is still prowling about on the earth, seeking the proud ones whom he may devour (1 Pet. 5:8). The only way to “resist” him is to “humble” ourselves, to gird ourselves with humility because “God resists the proud, but gives grace to the humble” (1 Pet. 5:9, 5-6). The Lord Jesus is a good example in this matter. Satan exalted himself, but the Lord Jesus “humbled Himself” (Phil. 2:8).  Thus, the Lord overcame Satan, and Satan had nothing in Him (John 14:30).

Genesis Is About Re-Creation and The New Birth

The opening chapters of GENESIS Chapter are not primarily about God’s creation – They concerns LIFE. It concerns the New Birth the Lord Jesus spoke about in John 3:3, 5.   The Genesis narrative CONCERNS Re-creation.

2 Cor 4:6 – For God, who commanded the light to shine out of darkness, has shined in our hearts, to give the light of the knowledge of the glory of God in the face of Jesus Christ.

Just as The Spirit of God  God hovered in Genesis chapter one and transformed the darkness, death, chaos and ugliness into light, life, order, beauty. He does the same in our lives when we are Born Again of His Spirit.   As a hen broods over her eggs in order to produce little chickens so God’s Spirit hovers over us to bring us to Christ!

Before we were saved. We were waste and empty with meaningless lives.  We were covered with darkness.  Before we were saved our soul  was an abyss, a bottomless pit swarming with demons,   We were  driven to lose our temper, to gamble, to go to see X- rated movies, and to do many other evil things. We were waste and empty, yet full of darkness and death.  But, one day, some living One began to hover over us, to work within our heart, to brood upon the death and the deep within us. He will rebuke in a brooding way, in a very kind way,

In our experience then came the speaking.  Through that speaking, you received a living Word and that living Word enlightened you within. When God spoke to you He commanded the light to shine out of darkness. “God who said, Out of darkness light shall shine, is the One who shined in our hearts…” Hallelujah! God’s speaking brought in light.

The Lord Jesus said that whoever hears His Word and believes has life (John 5:24). If we hear the Lord’s Word and believe, we have life. James 1:18 tells us that God has brought us forth with His Word.

The light came to dispel the darkness that covered the waters of death.  Firstly, the Spirit BROODS; secondly, the Word of God comes; thirdly, the light comes. We enlighten within. Something shining within.

In addition to 2 Corinthians 4:6, we have John 1:4, 5, and 9. “In the beginning was the Word…In Him was life, and the life was the light of men. And the light shines in the darkness, and the darkness did not overcome it” (John 1:1, 4-5).  Darkness can never overcome light. Light always dispels darkness. When light comes, darkness must flee.

Yes, the opening chapters of Genesis concern our regeneration; they concern our being ” Born Again”!

Three Men in Genesis Make Up The Believer’s Experience

In a sense, we are all Abrahams because we have been called and chosen by God  That is the origin of our life in the Spirit.  The book of Ephesians tells us ….

Eph 1 : 3 to 5  – Blessed be the God and Father of our Lord Jesus Christ, who has blessed us in Christ with every spiritual blessing in the heavenly realms. 4 For He chose us in Him before the foundation of the world to be holy and blameless in His presence. In love 5He predestined us for adoption as His sons through Jesus Christ, according to the good pleasure of His will

Abraham was called by God while he was still worshiping idols in a pagan, satanic land.  The God of glory appeared to him.   A man who has seen the glory MUST respond to the call and Abraham followed after God!   God has also shown us that ONE who is the image and glory of God, Our Lord and saviour Jesus Christ – and we have been called and we have followed!  We have been called by His compelling love and have learned to live by faith in God and in fellowship with Him.

Isaac represents the matter of the free grace received as our inheritance.   We have not only been called and have learned to live by faith in God and in fellowship with Him, but we are daily enjoying something that we have freely received as our inheritance in  God.  Grace brings enjoyment.  If we do not have any enjoyment in our Christian life, we will not be able to live the Christian life. Rather, we will be very miserable. Praise the Lord that we not only have the aspect of Abraham but also the aspect of Isaac, which is the aspect  the free grace received as our inheritance in Christ. Grace simply means the enjoyment of God. It is God Himself becoming our enjoyment in our spirit. Many times we have difficulties which trouble us mentally and emotionally. Nevertheless, while we are suffering in our mind and emotion, there is a sweet sense deep within our spirit.  This is our inheritance, that we have received freely.

Let’s look at the life of Isaac. He was passive!  Everything he received from his father Abraham.

The late apostle of the church Watchman Nee describes the life of Isaac as follows – in his book  ‘The God of Abraham, Isaac, and Jacob.’

“In Genesis 21 Ishmael was mocking on the day Isaac was weaned, but we do not see any record of what Isaac did when he was young. When Abraham put the wood for the burnt offering on him, he did not say a word. When Abraham bound him and laid him on the altar upon the wood, he did not say anything either. He went wherever his father told him to go and did not say anything. At such a critical moment, he only said, “Where is the lamb for a burnt offering?” (22:7). In Genesis 23 his mother died, and in chapter twenty-four his father found a wife for him. He did not make any decisions, and he did not do anything for himself. He had nothing of his own. When he was sixty years old, he had two sons, which was not unusual, because Abraham also had two sons. God commanded Abraham to cast out the first son and put the second son on the altar, but He did not command Isaac to do this. Although God loved Jacob and hated Esau (Mal. 1:2-3), He did not ask Isaac to do anything. Abraham experienced a famine in Canaan, and Isaac also experienced a famine in Canaan (Gen. 12:10; 26:1). When the famine came, Abraham went down to Egypt. While he was there he told others that his wife was his sister. In the end he was rebuked by Pharaoh (12:18-19). Although Isaac did not go down to Egypt when the famine came, he went down to Gerar. He also said that his wife was his sister. In the end he was rebuked by Abimelech (26:9-10). Later, Isaac dug some wells, but the wells that he dug were those that his father had dug when he was alive. After his father died, the Philistines covered up the wells, and Isaac opened them up again. He called them by the same name that his father had called them (v. 18). After he died, he was buried in his father’s grave. Even his grave was prepared by his father (49:30-31). This is the history of Isaac.

Even while we are being persecuted and we suffer in your mind, emotion, and senses, deep within ourselves we sense something sweet which caused us to be happy.   We are experiencing Christ’s grace  as our free inheritance in  the God of Isaac.

Jacob – The Discipline of The Spirit

Go to – Jesus In Every book In The Bible

RETURN TO – THE BOOKS IN THE BIBLE